Add a Function Keypad to CTR2-Mini 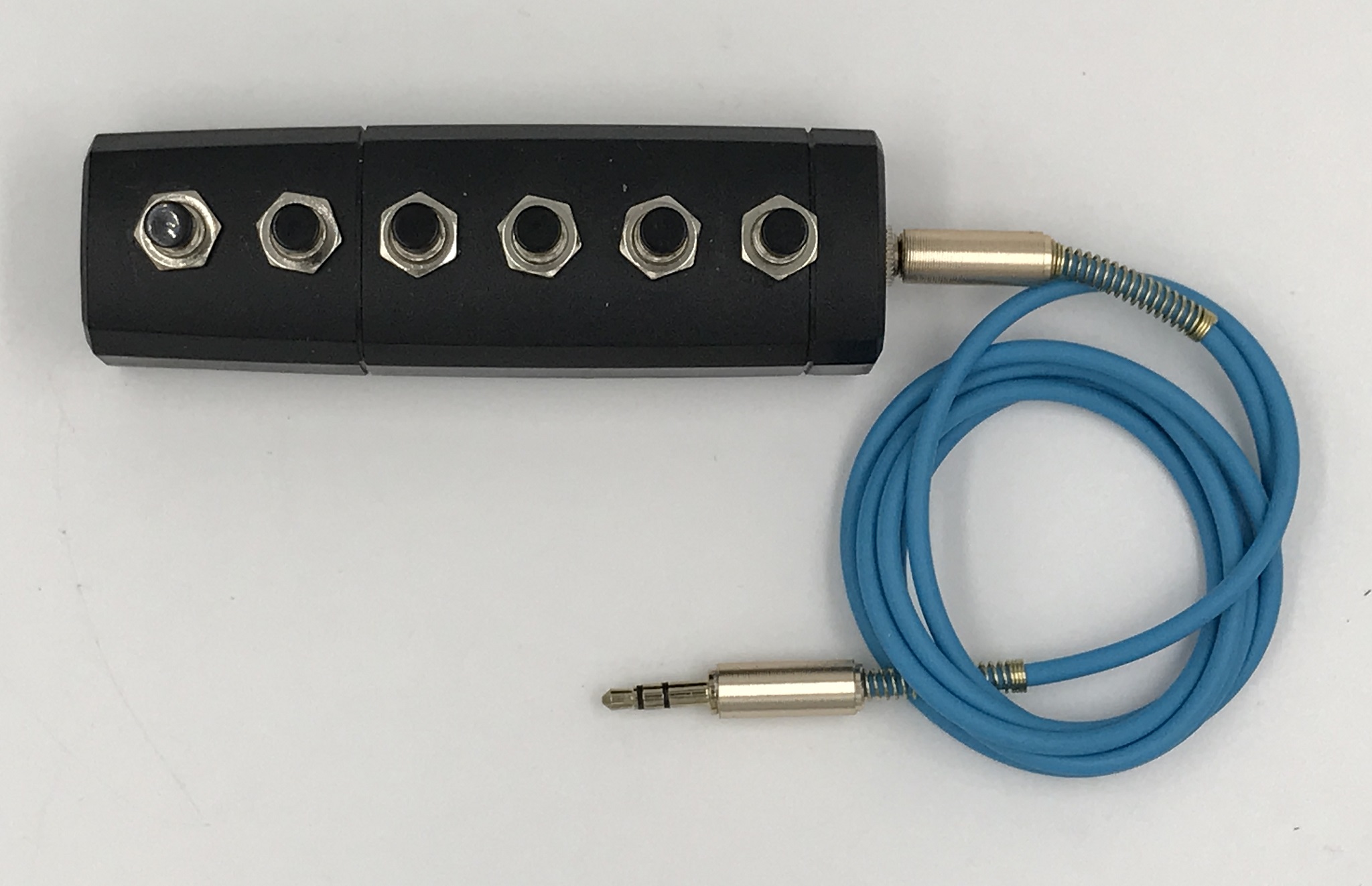 The user interface on CTR2-Mini is pretty simple. There’s just a rotary encoder and the few buttons built into the Wio Terminal. Normally this works out pretty well, but there are times when you just want to press a button to execute a function, say to send a CW buffer or change keyer speed, for example.

Having a keypad is even more important now that firmware v1.08.00 has been released. This firmware adds a ‘shift’ function that gives each function button and the 5-way switch on the Wio Terminal normal and shifted functions. Just assign SHIFT to one of the normal buttons. When you press this button, all the buttons (except the PTT) change to their shifted functions (like calculators do).

The keypad connects to the Remote PTT jack on the back of the Mini (next to the RJ45 jack).

NOTE: To use this option with a Flex-Only Mini, wire the RMT_COM_PTT on the pushbuttons to pin 22 of the Wio Terminal GPIO plug then connect a 10k pull-up resistor from pin 1 (+3.3v) to pin 22 on the Wio’s GPIO plug.

For those of you that aren’t familiar with a resistor ladder, it’s simply two wires with an assortment of resistors and push button switches in parallel. When you press one switch the resistor connected to it pulls the 10K ohm pull-up resistor on the Remote PTT analog input to ground. The Mini reads the resulting voltage change and determines which button was pressed. To increase accuracy there is a Recalibrate option in the Config->Function Btn menu that allows you to set the Mini to the exact voltage that each resistor provides.

It’s very simple, but not foolproof. For instance, if you press more than one switch at the same time all bets are off as to what voltage the Mini will see and what function it will execute (of the programmed functions). Knowing this, just press one button and you’ll be fine.

You can build the keypad into any enclosure you have and use point-to-point wiring to wire it. Sounds like a perfect Altoids can project 🙂 I’ve also created a small PCB that fits in a Hammond 1551 box (the same box used for the Radio I/O module). You can order the PCB from on the order form (part # CTR2-MINI-FUNC-BTN-PCB) and purchase the components to build if from this Mouser BOM.

There are two 3.5mm jacks on the board. Connect either one to the Remote PTT jack on the Mini. You can plug a straight key or a PTT foot switch to the other jack. If you don’t plan on using this feature you only need to install one jack.

NOTE: The keypad will not work when the Keyer->RMT option is set to Key because the Mini uses analog input mode to read the keypad and this mode is too slow to read the straight key.

The schematic for this board is shown below. I’m the first to admit the schematic symbols a lot of the manufacturers are putting out now days are not very intuitive. I present this schematic so you can find where the resistors you ordered need to be installed.

The schematic for the hand wired function keypad is shown below. I used a New Age S3A-401210 enclosure I had laying around for the lead photo but you can build it into anything, even an infamous Altoids box. The buttons are from Amazon but you can use any momentary button you like.

I used a combination of standard 1/4 watt through-hole resistors to build my keypad as shown below. The resistor values do not have to match the values shown below exactly. If you deviate from the values listed just recalibrate your key pad using the Recalibrate Buttons option described next.

One of the drawbacks to the resistive ladder approach is that the exact voltage presented to the Wio when each button is pressed will vary depending on the tolerance of the resistors used. To compound this problem the CTR2-Mini SO2R Controller presents different voltages than a standalone Mini for each button.

To eliminate these problems a special Recalibrate Buttons option has been added to the Function Buttons menu. The default settings should work with a standalone Mini using the circuit above. If you use different resistors and get erratic responses to button presses, or use the SO2R controller, you should recalibrate the buttons.

To do this, simply select the Recalibrate Buttons option and press each button, starting with F1 in sequence. Once you get to F5 the program will save the new settings in the initialization file for future use.

NOTE: Always start with F1 and continue to F5 in sequence otherwise the calibration will fail. If you build a keypad with only 3 or 4 buttons just press the last button twice to skip the higher buttons in the sequence.

Construction is not critical. Use whatever you have laying around. What is critical though is that you must use a shielded cable between the keypad and the Mini. Keep it as short as possible. The input to the Wio Terminal is high-impedance so it can easily pick up RF from your transmitter. The 100nF (.1 uF) cap on the keypad and another 10nF (.01uF) cap in the Mini should keep the RF out but if not, toroids are your friends.

Setting up the Function Buttons

The Function Buttons menu can be found in the the Config menu. This menu displays the five function buttons along with their assigned functions. The 6th button’s function is fixed. It can be momentary PTT, latching PTT, or Straight Key, depending on the Rmt setting in the Keyer menu.

To change a function simply click on the menu item for that button and select a new function from the list. There are two pages of function buttons. The first page displays the function buttons and 5-way switch ‘normal’ functions. Select SHFT FUNCTN> to open the shift function page.

Select one of the function buttons or 5-way switches you wish to set. This opens the function page. Again, there are two pages of functions to select from. Select MORE> to move between pages and EXIT> to return to the Function Btn menu.

To access the shifted functions of the buttons and switches you must assign the SHIFT function to one of the normal buttons. I like to use the F5 button because its easy to remember.

Once you’ve set your function buttons and the 5-way switches, press the SHIFT button you assigned to one of the normal button to open the Shifted Func Btn List. With this list visible press any function button or 5-way switch to activate its shift function. To view the functions assigned to normal buttons and switches press and hold the encoder for longer than 2 seconds. Normal functions are executed immediately when you press a button or switch.

I hope that give you an idea of what this feature does. If you have any questions or suggestions please contact me. I’m good on QRZ.com too.