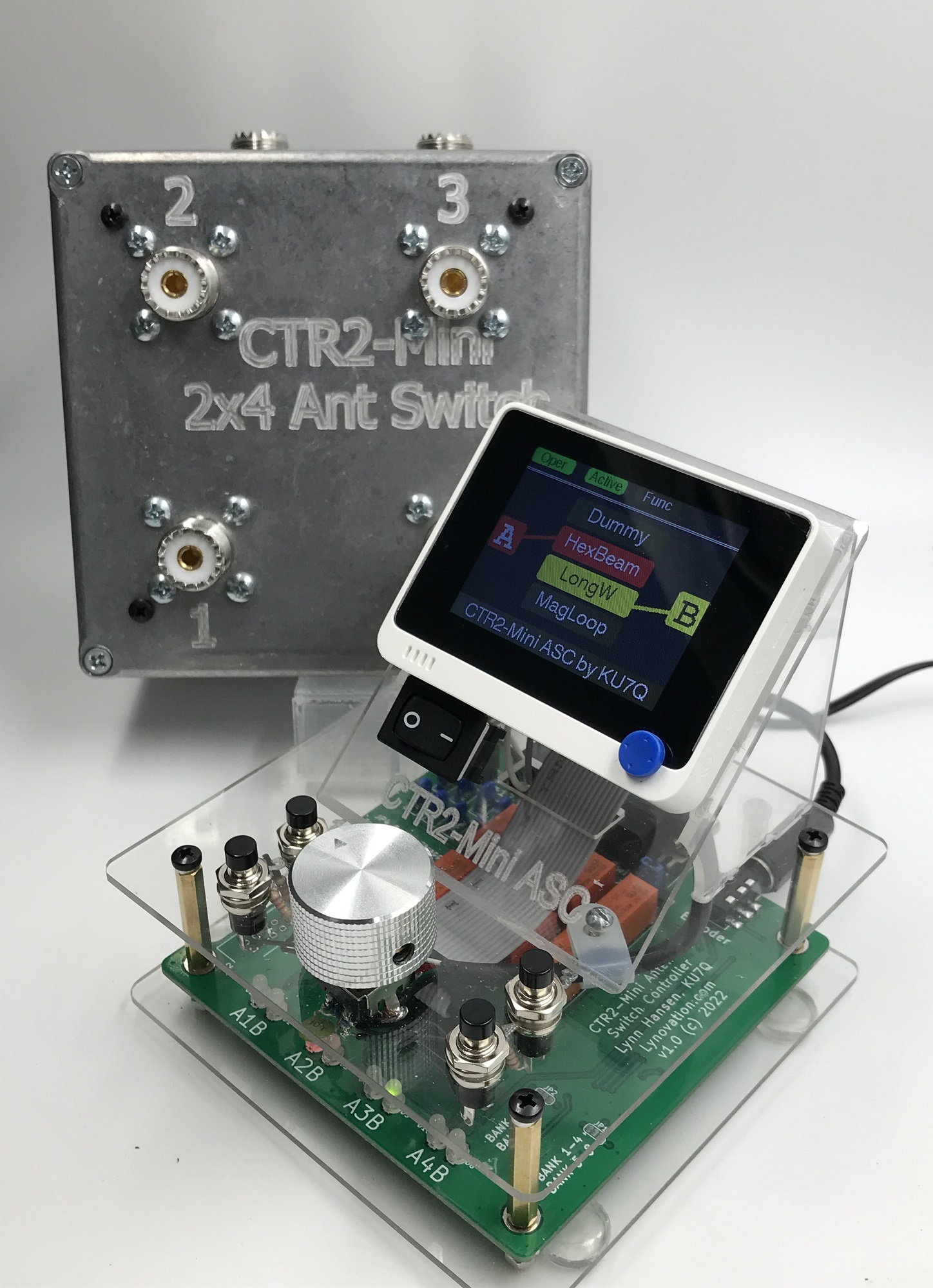 Many of us have more than one antenna and use a plethora of ways to select one to use. From simple patch panels to fully integrated remote antenna switch controllers you are only limited by your budget.

Most remote antenna switch manufacturers offer controller options for their switches. Typically they use simple push buttons or rotary switches that do nothing more than assert voltage onto one of the control lines to the relays in the remote switch. There’s nothing wrong with these controllers. They’re simple and reliable. What’s not to like? Others integrate with your radio and can switch antennas based on the band you select. Of course you need to own one of the radio’s they can interface with and they can come with a pretty hefty price tag.

With so many options already available, why would I go through the effort to reinvent the wheel? Well, for starters, I love designing and building stuff. And I love sharing my projects with other like-minded people with the hope that at the very least I can inspire someone else to design and/or build their own stuff. In my mind, building your own station accessories is one of the rewarding aspects of the hobby that’s unfortunately becoming a lost art.

Another reason I designed this switch is because I wanted to duplicate, if not expand, the functionality I built into the original CTR2 station controller for the CTR2-Mini product. For the new SO2R controller I’ve been working on I also wanted a way to control a dual-port antenna switch (i.e. two radios and multiple antennas). The original CTR2 antenna controller does not have that capability.

What I ended up with is the CTR2-Mini Antenna Switch Controller, or ASC for short. It’s shown in the lead photo along with a 2×4 port antenna switch I built using two eBay 1×4 antenna switches.

So what’s so special about this ASC?

First, it is a standalone controller. It only requires a +12 VDC power supply to be fully operational. It can control any remote antenna switch, such as the DX Engineering DXE series antenna switches. It’s ideal for controlling the DXE-RR8-HB single-input 8-port or DXE-RR2X8B dual-input 8-port switches. The only requirement is that the remote switch must accept a separate control input line for each relay.

What makes this switch controller special, as described in the SO2R Update post, is that it can seamlessly integrate into the CTR2-Mini ecosystem. Like the CTR2-Mini it’s based on the Wio Terminal from Seeed Studios which has a great little color display and a small assortment of buttons. It’s programmed using the Arduino C/C++ extensions so it’s extremely easy use. While you can use just the Wio’s buttons to control it, I’ve added an optional rotary encoder and function buttons to make it much easier to use.

The ASC shows the selected antenna(s) graphically. As mentioned, it can control single or dual-port antenna switches with up to 8 antenna ports, so the arrangement on the screen changes with the configuration. Here’s a snapshot of it set up to control my SO2R setup with two radios and four antennas.

Radio ports are color coded. The antenna selected for each port is also color coded to match the radio it’s routed to along with a line connecting the two.

If you look at the lead photo you see how the LEDs on the control board are arranged in four groups of two LEDs. The red LED is lit for the antenna selected for Port-A and the green LED is lit for Port-B’s antenna. These are bi-directional LED so the colors switch if you configure the controller to source (-) voltage to the remote antenna relays instead of (+) voltage.

The three buttons on the Wio Terminal control the Operate (Ready)/Lock, Active/Off, and user defined options. In this example, the [C] button is set to swap the antennas. Pressing it will instantly change A to the Hexbeam and B to the Long Wire.

The green antenna icon in the top-right indicates the ASC is connected to WiFi and sending status updates to the Mini’s in the SO2R setup. The 32 next to the antenna icon represent the antenna selected for each radio and also appear in the same area on each Mini.

Like the Mini, a rotary encoder is the primary method of navigating the menus on the ASC. The encoder can be mounted on the enclosure as shown in the lead photo or it can be mounted remotely. In addition, up to four function buttons can be added. The function buttons utilize the same resistor ladder used in the Mini’s remote function keypad. These buttons are programmable. I found that setting F1 and F2 to open the A and B switch menus, F3 to toggle Active/Off mode (Off opens all relays), and F4 to Swap antennas works out well.

The Mini (or Mini’s) connected to the ASC via WiFi also have an Ant Sw menu on their main menu. This menu allows you to control the ASC from either Mini. You can also change the label for each antenna remotely. Linking the ASC the the Mini(s) also gives you the option of automatically switching antenna ports for each band. When used in the SO2R configuration, each Mini can have it’s own band assignments depending on the radio in use.

No, you don’t get two ASC units for the price of one by just paying shipping and handling (sorry for the lame joke).

A simple Node-RED flow provides a third option for controlling the ASC. This is a single flow that can easily be added to any other Node-RED flows you may already be using. The control protocol is extremely simple and easy to implement so you can create your own flow or customize mine to fit your needs.

Here’s a screenshot of the Node-RED flow. It follows the same convention as the ASC display but there are not interconnection lines showing the routing. I don’t know how to do that on Node-RED.

To select an antenna, click the A or B-Port button first (it will turn green), then select the antenna. You can control the switch modes (Ready/Lock, Active/Off) and Swap antennas, and you can rename the antennas as needed.

A simple USB connection from the ASC to your Node-RED host provides the communications.

And if that isn’t enough…

Finally, the ASC supports a terminal interface. Just connect to the ASC’s USB serial port using any terminal program like Putty or Tera Term and you can control all of the functions on the ASC from your PC’s keyboard. This is particularly handy when setting up the basic configuration of the ASC (antenna labels, the access point’s SSID and password, and the Mini’s IP address). These settings can be done with the rotary encoder but it’s tedious.

Here’s a screenshot of the terminal mode menu. Just hit the [Enter] key to open the main menu.

The design of the CTR2-Mini ASC is based on the CTR2-ASC design using the 4514 4-to-16 multiplexer and ULN2803A Darlington drivers. Unlike the CTR2-ASC I used 5 volt latching relays which seem to be in good supply right now. The 12 volt latching relays I used in CTR2-ASC are STILL out of stock and won’t be in stock until at least August. The last batch in March sold out before I could order them, which is one of the reasons I discontinued the CTR2 controller product.

One of the main requirements when switching a dual-port antenna switch is that you can NEVER allow the same relay on the A and B bank to operate at the same time. This would parallel your two radio’s antenna ports, and that would be bad. The ASC firmware prevents this from happening but as a fail-safe the A/B latching relays are wired such that if one relay is active it breaks the output path of the other relay, so it is physically impossible to operate both the A and B relays on the same antenna port at the same time.

But wait, this board only controls a 1×8 or 2×4 antenna switch. How do I control a 2×8 antenna switch? Simply add another controller board using the expansion port. On the second board, open jumpers JP1:1-2 and JP2:1-2 and add a solder bridge between JP1:2-3 and JP2:2-3. The ASC will recognize the second board and provide a 2×8 switch interface.

The remote antenna switch is connected to the ASC control board using a standard RS232 9-conductor serial cable. A DB9-to-terminal board breakout can be used to wire to your antenna switch, or you can just cut the cable plug off and hardwire to your switch.

You can download the complete bill-of-material at the link below. I’ve also created a project notebook at Mouser.com. You can order almost all of the parts needed to build the ASC, including the Wio Terminal if you need one, from the project notebook. Open the Mouser CTR2-Mini ASC v1 project notebook here.

I will order the PCBs for this project once I have a few people express interested in building one. Two boards will be required. The main PCB contains the 5 volt regulator, decoder logic, relays, etc. The other one connects the main PCB to the Wio Terminal. The boards will come with all of the SMT components pre-installed, you’ll just need to add the parts from the project notebook. In addition, I will throw in the single and dual-row pin headers you’ll need to complete the boards and a short length of 16-conductor ribbon cable to build the interconnect cable to the Wio. I expect the main PCB will be around $8.00 and the interconnect board around $1. I will not be offering complete part kits for this project but I can supply the acrylic enclosure shown in the lead photo if you want to duplicate my system. The enclosure comes with the mounting hardware for the boards and Wio and will be $22.00.

I hope this provides a idea of what the ASC does and inspires you to think about building your own. When paired with a CTR2-Mini you get a complete station controller in a very small, and inexpensive, form factor.

If you have any questions or want to get on the order list please contact me. You can also email me from my QRZ listing. Also, please consider joining my Groups IO group at https://groups.io/g/CTR2